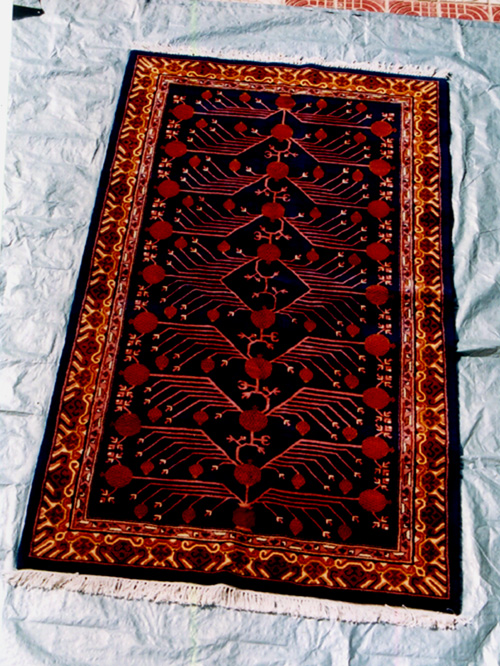 Size: (1.50m x 2.70m)This is a Kashgar carpet with a pomegranate-vase design on a dark-blue dyed background. The art of carpet making has developed since time immemorial in the vast territory of Xinjiang. The oasis towns of Khotan, Yarkand and Kashgar in Xinjiang Province, western China, have been considered the main production centres of rugs since ancient times, and among these Khotan has always played the dominant role. The entire town is in some way involved in the production of carpets and it houses a great number of workshops and ateliers. Traditional Uyghur rugs are entirely made from wool, a wool and cotton blend, or from silk. Those in wool are made using high quality fibers taken from aspecial breed of sheep.The silk for rugs is produced locally using techniques that have evolved over the centuries. Uyghur weavers use both horizontal and vertical looms; the latter are more common and permit a greater degree of control over the knotting. Uyghur rugs stand out for their variety of different decorations , including composition developed around geometric motifs that might be inspired by plants or animals. A special mention must be made of figural carpets. Figural compositions of any sort vanished from the local repertory until the 19th century, but as often occur indecorative languages, expressions survived in which elements can be recognized from an earlier consolidated ornamental motif. The most wide spread compositions are figurative in the strict sense of the term but they are not narrative; they reproduce animals in landscapes in a naturalistic manner; they are distinguished by their static nature and by lack of action (from an article in Ghereh Magazine).